- January 09, 2019
In the second day of Trade Strike, protesters have vandalised a government bus in Dinhata, Cooch Behar on Wednesday morning. In this incident two people including bus driver have been injured. Dinhata police rushed to the spot.
On the other hand, agitated protesters of Howrah have pelted stones to a bus at Shanpur more on Jhikira- Howrah route. Two students have been injured after protestors participating in the two-day nationwide strike called by Central Trade Unions demanding minimum wages and social security schemes among others.
The central trade unions’ 48-hour nationwide strike remained largely ineffective across West Bengal on its second day on Wednesday barring a few sporadic incidents of vandalism.
Train services were briefly affected on the Sealdah-Lakshmikantapur Namkhana and Diamond Harbour sections of Eastern Railway as strike supporters threw banana leaves on overhead wires. 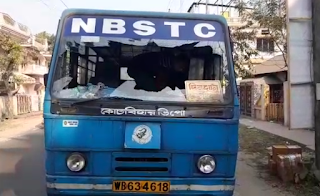