- November 27, 2017
SILIGURI: A leopard, apparently being chased by an elephant herd, was trampled to death by a male tusker leading the herd on Sunday morning at Malbazar, Dooars (Jalpaiguri).
Sources said the herd, including a calf, was crossing Betguri tea garden on Sunday morning when the leopard started chasing them to catch the baby jumbo. Initially the herd didn't notice the predator that was following them hiding in the bushes. The male tusker, however, noticed it and gave the leopard a chase. The latter retreated and climbed atop a tree. The angry tusker charged forward and hit the tree, which got uprooted. In a bid to save its life, the leopard tried to jump off and run towards the tea bushes. But the tusker swiftly wrapped the leopard with its trunk and dragged it. Though the leopard struggled to free itself, it failed as the tusker raised the leopard high in the air and smashed it on the ground. It further chrushed the leopard to death before leaving the spot.
Forest officials, however, questioned the incident as no such thing has happened in the tea gardens recently. "Its possible for a tusker to uproot a tree. It is also difficult to judge the behaviour of a wild animal," Animesh Basu, member of state's wildlife advisory board said.
The forest officials took the leopard for autopsy. "So far we've only heard the accounts of villagers. We're not ruling out the possibility of a foul play by the villagers. It'll be clear once we get the autopsy report," he said.
Pinak Priya Bhattacharya | TNN 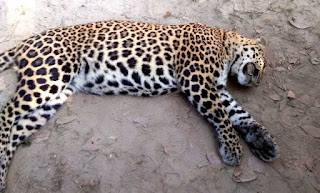