- November 23, 2017
A middle-aged man was trampled to death by a elephant at Gorumara National Park near Lataguri in Dooars on Thursday. The deceased has been identified as Siddique Hussain, who was employed as a private security guard at the Jalpaiguri Central Co-operative Bank.
Eyewitnesses said that Hussain, along with other staff of the bank, was going from Malbazar to Jalpaiguri on official purpose. As they were passing through Gorumara National Park stretch of National Highway 31, they came across a elephant.
Out of hyper bravery, Hussain got down from the car to take a photograph of the tusker. Seeing him, the elephant walked towards him. Despite this, instead of moving to a safer distance,. It was then that the elephant caught him with its trunk and then trampled under its feet.
The elephant was so angry that it then dragged the dead body to the middle of the road using its legs. All this happened as several vehicles stranded on either side of the highway watched helplessly.
Siliguri 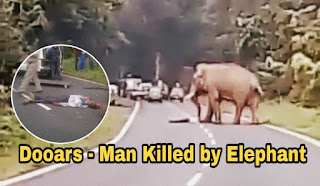