- August 26, 2017
Two mysterious explosions were reported off the Digha coast in West Bengal's East Midnapore district this morning. Some hotels located close to the coast are reported to have developed cracks on walls, and glass panes shattered from the impact.
The explosion sites are said to be well out in the sea, and not within visible range from the coast.
The sound and shock waves from the explosions caused panic in the tourist hotspot of Digha. People left homes and hotel rooms and rushed out on to the streets.
Police sources said they have found no material evidence on land, reinforcing assumptions that the explosion site was quite some distance off the coast.
The sound was also heard from Tajpur, another popular tourist spot about 18 kms from Digha.
“It was a terrible moment. I cannot express my feeling when I heard that sound. This is a weekend and there is a rush of tourists in Digha. There was panic everywhere,” said Malabika Banerjee, a tourist.
Some said there was a mild quake after the explosion.
“The first sound was heard around 11.10 am. It was followed by another one and we felt a quake too. None had any ides what happened and tourists rushed out of their rooms and went to the roads,” said Girish Raut, a hotel owner at Digha.
Further details are awaited. (With inputs from TOI & HT) 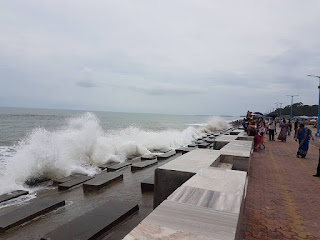