- August 04, 2017
Bengal tourism department is considering the introduction of the beating retreat ceremony at Fulbari, on India-Bangladesh border, like the one at Wagah on the Pakistan frontier.
State tourism minister Gautam Deb today held a meeting with P.R. Mehta, the former president of the Council of Architecture, a body that functions under the central government, and discussed the infrastructure development required on the site to approach the Centre for introducing the ceremony.
The ceremony on the Pakistan border in Punjab is observed two hours before the sunset everyday when soldiers of both the countries lower their respective national flags and participate in a joint parade. The ceremony attracts thousands from both sides.
"We are planning to introduce beating retreat ceremony at Fulbari, which is hardly 5km from Siliguri, on the lines of the one at Wagah. I have visited Fulbari a couple of times and discussed the proposal with officials of the BSF. Although the idea is in a very preliminary stage, we want to develop the infrastructure and so, held a meeting with P.R. Mehta today," Deb said.
By BIRESWAR BANERJEE
Telegraph 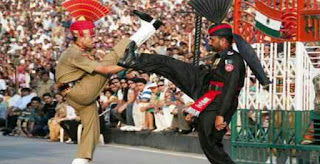