- August 01, 2017
A house was completely destroyed when a bomb blast took place at Lokpur village under Khoyrasole police station in West Bengal's Birbhum today morning at 9.30am. No casualties as no one was there.
Locals alleged that Sheikh Samir Chand and his aide Piyar Molla used to make bombs here. But they never stayed here. They live in another house in the village. After the blast they have vanished from the village said his neighbours.
Police and bomb squad reached the site after the blast and have taken samples.
Pic: Site where bomb blast occurred. 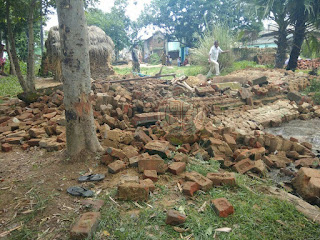