- August 01, 2017
Five policemen on Monday were arrested for their involvement in harassing a family on Friday midnight at Dekachang in Resubelpara, North Garo Hills, Meghalaya. The policemen went to an extent of even stripping victim’s girl friend. The incident took place around 1:30 am.
On Saturday the policemen were arrested and latter granted bail. However, they were arrested again on Monday.
The policemen were allegedly drunk and had barged into the victim’s residence and assaulted all the elderly members. The policemen had even broken a beer bottle on the head of one of the victims.
An FIR against the attackers was filed yesterday morning at Resubelpara police station.
“We have arrested all the accused policemen and investigating the matter”, said Dalton Marak, superintendent of police.
Locals said that three cops were involved in brutal assault on the victim identified as Tezeng Marak, his girlfriend and his younger sister.
“They entered my room and kicked me and my girlfriend and began to beat me mercilessly. They even hit us with knives. They pointed their revolver at me and threatened to shoot me,” Marak said in his FIR.
During the incident there was huge commotion and people from the neighbourhood arrived at the scene. “They had planned to murder us and cut our bodies to pieces. They even hit my sister and damaged my property. Worse thing was that they stripped my girl friend and took videos threatening to post them on social media,” said the FIR.
The victim said that the policemen had made off with cash an amount of Rs. 38,000 and his wallet with the ATM card and Rs. 6000.
The five police persons involved in the incident were immediately arrested after the incident though they were let off on a bail bond the same evening despite the grievousness of the crime.
The five personnel involved in the incident however were arrested once again today after the clan members submitted a supplementary FIR in the case as the victim and his girl friend’s injuries have forced Tezeng to go to Guwahati for treatment while his girl friend is still recuperating in Goalpara.
Interestingly, the medical report of the victims stated that they only received minor injuries where as the victim who was hit on the head with a beer bottle (the sister) was not even given medical care.
Social activist Jaynie N Sangma, who reached the place today after receiving complaints of police inaction, said that the entire incident was shocking.
“How can they be let off even after committing such serious crimes? This is sending a very wrong message to the people and the people behind letting them off need to be questioned”.
The accused personnel were rearrested today after the supplementary FIR with a highly placed police source stating that their uncooperative attitude led to the bail being cancelled – something that should have not been given in the first place.
The arrested police personnel have been identified as Salchi K Sangma, Tesri K Sangma, Shembordeny Kreger., Jingjang K Sangma and Teidiam M Marak. 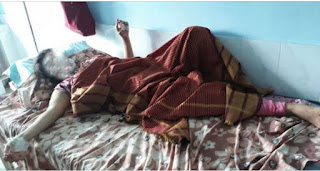