4 People Arrested with Arms in Kolkata

- August 04, 2017
The Kolkata Police arrested four men with sharp weapons from Russel Street area under Shakespeare Sarani Police Station limits in southern part of the city, officials said.
According to reports, a night patrol unit of the city police intercepted a yellow cab with two different number plates in front of SBI branch at Russle Street and booked four youths from the taxi.
"During night patrol, our officials spotted a yellow taxi with two different number plates and intercepted it," a senior official of Kolkata Police told IBNS.
"We have booked four persons from the taxi and recovered one toy gun, two sharp knives, 2 wide polymer tapes and one bed sheet from their possessions," the official added.
Police said that one of the four arrested is resident of Kolkata's Bentinck Street area and remaining three are from Mumbai.
"We have arrested a 21-year-old Kolkatan, Md. Ali Azad, and three residents of Shivajinagar in Mumbai, Sk Arman (22), Mohsin Khan (21) and Javed Khan (21), for assembling with an ulterior motive," a local police officer told IBNS.
"We have seized the taxi with tampered number plate and registered a case at Shakespeare Sarani PS under IPC sections 399 (Making preparation to commit dacoity) and 402 (Assembling for purpose of committing dacoity), and sections 25 and 27 of Arms Act," the official said.
However, police have started investigation into the matter while the four will be produced before a local court on Friday.
(Reporting by Deepayan Sinha, Image: Representative picture of Kolkata Taxi) 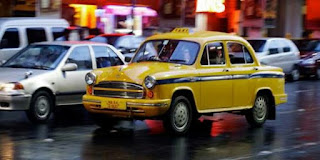