- August 23, 2017
Fake Indian currency notes of the face value of Rs 5,20,000 in Rs 2,000 denomination have been seized from near Bangladesh border in West Bengal’s Malda district, a BSF official said on Wednesday.
Acting on a tip-off about smuggling from Bangladesh, the Border Security Force troopers of border outpost Churiantpur in Malda district planned an ambush in and around the Indo-Bangladesh Boundary Fence (IBBF) area on Tuesday evening.
"The BSF recovered a bundle of 260 fake Rs 2,000 notes from the border area and handed over the seized notes to Kaliachak police station for further action," RPS Jaswal, Deputy Inspector General of BSF’s South Bengal frontier, said in a press release.
"The troopers challenged a suspected smuggler who was about to collect the package thrown from the Bangladesh side of the fence but the suspect fled away taking advantage of the darkness," he said.
The BSF of the South Bengal Frontier has seized counterfeit Indian currency notes of the face value of more than Rs 36 lakh and apprehended five smugglers so far during 2017. 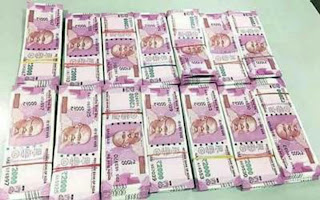