- July 30, 2017
Jalpaiguri Forest Ranger along with his special team arrested two members of a gang involved in the selling of reptiles on Sunday.
The team seized four reptiles (gharial) from Panjipara area.
Speaking to ANI here, Belacoba Forest range, Ranger Sanjay Dutta said, "They were operating through Whats App group, people from Bangladesh, Sikkim are included in the group. The accused have been identified as Mohammad Ashif and Mohammad Samsuddin. There is a whole process that takes place. First, the biding takes place after which the skin of the reptiles is sold."
Slow lorises, crocodiles, tortoise were being sold by this international smuggler gang. (ANI) 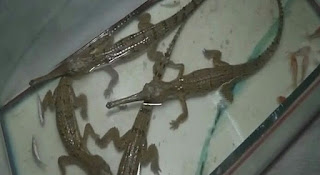