- July 15, 2017
The Raiganj bandh called by the Raiganj Merchants Association on Saturday affected normal life in the district headquarters town of North Dinajpur district. Shops, business establishments, schools and colleges were closed, private vehicles were off the road. There was no report of any untoward incident, the police said.
The Raiganj Merchants Association had called the bandh to protest the burning of many shops and business establishments during yesterday's Adivasi rally in the town.
They are also demanding that the state government pay compensation to those shop owners whose shops or business establishments were vandalised or set on fire during the Adivasi rally.
A rally taken out by Adivasis to protest against the alleged rape of four tribal girls turned violent on Friday setting fire to a number of shops, buildings and damaged vehicles in Raiganj town. 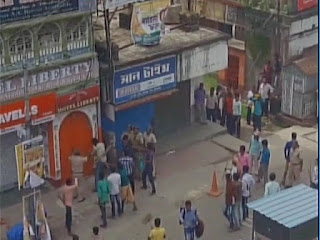