- July 30, 2017
Kanyashree Prakalpa is not just a mere scheme that provides financial assistance to girls for their education these days but it now plays a major role in instilling a zeal among them to overcome hindrances and surge ahead in life with a lot of promise and determination. The brainchild of Chief Minister Mamata Banerjee, Kanyashree Prakalpa, has helped lakhs of girl students starting from a Class VIII cancer patient to an inmate of a stay home to continue with their struggles to fight on and emerge as winners. On Friday, 20 beneficiaries of Kanyashree Prakalpa were awarded for their achievements in their respective fields and for their fight to establish themselves in society.
Triparna Das, one of the beneficiaries, has been suffering from cancer since Class VII. Her parents had almost lost hope when they came to know that Triparna was suffering from brain cancer. But the girl continued her fight and did not give up. The main credit of this pursuance lies with Kanyashree that encouraged her to continue with her studies.
Pratima Chetri, another beneficiary from Jalpaiguri, has another story to tell. She narrates how the financial support under the project helped her to continue with her studies and at the same time she won gold medal in a state-level taekwondo competition despite staying in a home. Kuheli Basak has utilised the money that she had got out of the project to buy a photocopy machine and start a small business to continue with her graduation level studies. Unicef's representative in India, Yasmin Ali Haque, who was also present at the function lauded the efforts of Mamata Banerjee government in helping girl children to carry on with their studies that have also resulted in a sharp drop in child marriages after the implementing of the project. "Today there is a gathering of a large number of schoolgirls and I am happy that they have realised the value of education," she said. In a bid to make the task to gather information on Kanyashree Prakalpa, the state Women and Child Development and Social Welfare department has launched Kanyashree Online 5.0 with a new module of e-learning and a Kanyashree mobile app. There was a loud cheer from the girl students as soon as the Chief Minister entered Netaji Indoor Stadium congratulating her for winning the first prize in United Nations Public Service Award for Asia Pacific in The Netherlands on June 24 for her pet project. In a bid to mark its success, girls who have received the benefits performed a dance and a show on martial art on Friday.
Millennium Post 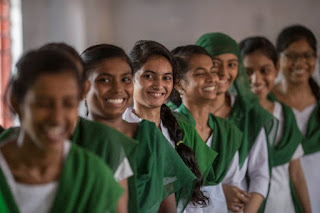