- July 27, 2017
Five armed men intimidated and robbed over a dozen passengers on an express train near Seelampur area of Delhi late on Wednesday night.
The government railway police (GRP) officials said the train was later stopped in Ghaziabad where an FIR was lodged and the passengers were given medical aid.
According to GRP, Farakka Express bound for Malda Town in West Bengal, had left Old Delhi railway station and stopped near Seelampur metro station where five armed robbers barged into coach S-9.
“The robbers intimidated and thrashed the passengers and escaped with their mobiles, cash and other valuables. An FIR has been registered for dacoity and the passengers have been given medical aid,” said Randhir Singh, circle officer (GRP), Ghaziabad.
Officials said the incident took place at around 10pm and the train was stopped at Ghaziabad junction at around 10.30pm. An FIR was filed under sections of 395 (dacoity) and 397 (robbery, or dacoity, with attempt to cause death or grievous hurt) at GRP police station.
Vipin Kumar, the complainant and a passenger from Banka district in Bihar, said that five men had barged into the train from shanties near the railway tracks in Seelampur.
“They asked for mobiles and cash. My brother and I resisted, but they injured us with knives. They also robbed other passengers of cash and mobiles. They deboarded after 10-15 minutes... it seems the train was stopped deliberately,” Kumar said in his complaint to GRP.
Officials said that 13 passengers in S-9 coach were robbed by the five men. The passengers were from Delhi, UP, Bihar and Jharkhand.
“We have also prepared a list of the belongings which were taken away by robbers. The FIR will now be sent to GRP Delhi for further investigation,” Singh added.
By Peeyush Khandelwal, Hindustan Times 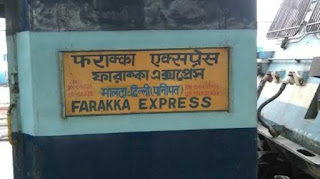