- July 21, 2017
Police and the Sashastra Seema Bal conducted a joint raid at Bhuterhat village in Jalpaiguri and seized six bombs after receiving a tip off.
While the SSB officials who raided the spot claimed that the bombs were Improvised Explosive Devices (IEDs) and fitted with detonators and wire, senior police officers have rejected the claim.
The police said the seized items were just crude bombs.
Sources said a jawan of 34 Battalion of the SSB posted in Cooch Behar district had got a tip off that bombs were kept at Bhuterhat.
"We have seized six IEDs which have detonators and wires. These bombs were found at a haystack, located close to the house," Jayanta Kumar Pathak, the deputy commandant of the 34th Battalion of the SSB, said.
"Polls to Dhupguri municipality are scheduled for August 13 and we doubt there might be a plan to create tension ahead of the elections," another officer of the SSB said.
Amitabha Maiti, the superintendent of police of Jalpaiguri, said: "Those are crude bombs and not IEDs. We have started an investigation."
The police used sand to cover the bombs, which were kept in a bucket. Later, the bombs were taken near Dhupguri police station.
Bhuterhat village is located close to the inter-district border of Cooch Behar and Jalpaiguri, about 45km from here.
Telegraph
In pic: Policemen and SSB personnel with the seized bombs on Friday. Picture by Biplab Basak 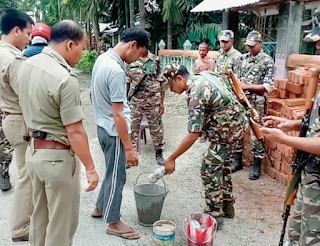