- June 02, 2017
A wild Bison, which gored four people to injury, was killed after being shots twice by dart gun in the Dooars, forest officials said today. The incident happened yesterday after the Bison strayed into the Banarhat tea estate and attacked four tea workers in past two days. The forest officials in a bid to restore the wild animal into the safe Gorumara forest, darted the bull twice after the first shot failed to make the wild sleep. Whilst the bull was being taken to the safe area, the animal died on way, said the forest officials.
In separate report a herd of elephants destroyed the standing crops, especially the paddy at Naxalbari area in Darjeeling district. The jumbos in groups began to roaming the area in search of food stumped on the paddy field and then savored paddy stored outside some of the huts. 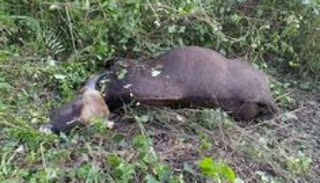