- June 20, 2017
Breaking his silence on the ongoing protest in Darjeeling, MP and Union Minister SS Ahluwalia has accused West Bengal Chief Minister Mamata Banerjee of violating human rights by banning internet in the troubled region to suppress the voice of the people.
Ahluwalia won from Darjeeling on a BJP ticket in 2014 with support from the Gorkha Janmukti Morcha (GJM). He has been constant touch with the Union Home Ministry on the ongoing crisis.
The Union minister has also indicated that the Centre may intervene in the current crisis since the state government is alleging "outside agencies" are fomenting trouble.
Speaking to CNN-News18 Ahluwalia accused the West Bengal CM of playing with fire. "She would do well to remember the debt of gratitude the nation owes to Gorkhas for their role in defending our nation,” he said.
The Darjeeling Hills have been simmering over the past two week after state government announced three language policy making Bangla compulsory at primary and secondary level. The GJM had taken exception to Banerjee's statement, launching a protest which later turned violent.
The protests once again ignited the long standing demand of GJM for a separate state, Gorkhaland. BJP had, in its 2014 manifesto, said that it will "sympathetically examine and appropriately consider the long pending demands of the Gorkhas, the Adivasis, and other people of Darjeeling and the Dooars region".
When asked about the BJP's stand on the matter, Ahluwalia said, “We remain committed to this promise. There is a procedure that needs to be followed. It is a 110-year-old demand, and a solution cannot be delivered overnight.”
Via: News18 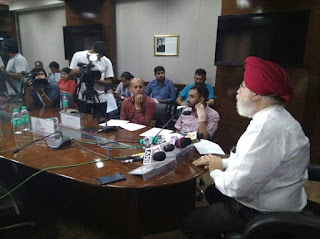