- June 01, 2017
A five-year-old girl was allegedly physically assaulted by a clerk in her school in Malda’s Maheshmati on Tuesday. A furious mob attacked the man and was arrested by police.
A student of Junior KG playschool, returned home yesterday with excruciating pain.
“It is really inhumane that a five year old child was taken to the toilet and sexually assaulted. After returning home, the little girl told my wife abut the incident. We took her to the doctor who confirmed that she was assaulted physically,” the girl’s father said.
The girl’s father Raktim Das (name changed) has filed a FIR at Englishbazar police station. Raktim Das and his wife are teachers in a government schools in Malda.
When neighbours and other parents came to know about the incident, they rushed to the school and attacked the clerk Biswajit Das. Later, the cops arrested him.
Many other parents complained that their children were also assaulted.
School principal Sudha Baidya confirmed the incident.
Englishbazar Police has started investigations. The girl was medically examined today. 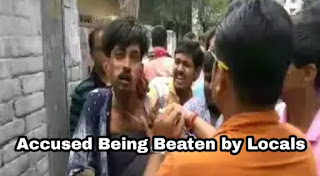