- June 15, 2017
West Bengal Chief Minister Mamata Banerjee on Thursday admitted that violence in Darjeeling on June 8 was due to an intelligence failure as police failed to control restive Gorkha Janmukti Morcha (GJM) supporters who attacked troops and indulged in arson to demand a separate state of Gorkhaland.
Report by Kolkata 247
Speaking during an event organized by the Bengal Police, she said, “I must say that there was an intelligence failure in Darjeeling on June 8. There was a conspiracy to attack my cabinet ministers by them (GJM).”
Banerjee was holding a cabinet meeting in Darjeeling – a first in 45 years – when GJM protesters laid siege to vast swathes of the town for hours, attacked and injured policemen and vandalized public property. The protesters were marching towards the venue of the cabinet meet.
“They (police) failed to gather information about the conspiracy these goonds (hooligans) planned to attack my ministers and policemen, including female officers,” she said, adding that action has been taken against the erring officers. Darjeeling’s SP and two station in charges had been shunted for failing to control the protests.
She exhorted her supporters to save the hills and avoid the protests, coining the slogan “Goonda hatao and pahar bachao (boycott hooligans and save hills)” to deliver her message.
Recalling GJM’s violent protests, she said, “I have seen many political struggles but I have never seen such violence before. They (GJM supporters) continuously attacked us for two hours with molotov cocktails. I am not going to tolerate this. Law will take its own course of action”.
On June 8, situation had turned out of control after Mamata Benerjee held her first scheduled cabinet meeting in the hills. Angry over what they called was a political stunt by Mamata to gain support in the hills in the name of administrative meeting – GJM’s Bimal Gurung had called for a 12-hour bandh.
The protesters clashed with police, which resorted to baton charge and burst tear gas shells to disperse the agitators who tried to march to the venue of the cabinet meeting.
Two columns of Army were deployed in Darjeeling town after the protests. Since then Darjeeling has witnessed massive protests which badly affected normal life in the Hills. 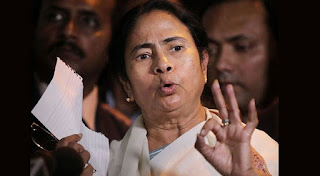