- June 14, 2017
The Criminal Investigation Department (CID) has arrested three fake CID officers from Phasidewa in Siliguri sub-division. The accused have been identified as Subodh Roy, Ranjit Choudhury and Bharat Das. According to the CID, Subodh Roy, a retired railway police personnel was the mastermind behind the incident. Police have also recovered a car which was used by the three accused. The incident comes at a time when the CID has been carrying out a probe in connection with fake doctor issue. Many fake doctors including some who were attached with some of the prominent private hospitals in the city have been arrested. Many other fake doctors were under the CID scanner. It was learnt that the CID has prepared a list of fake doctors in the state. According to CID sources, the three accused introduced themselves as CID officers and demanded money from one Mehboob Alam, a local businessman at Chathat area of Fasideoa. The accused threatened the businessman that if he does not pay the amount they would book him in false charges. The businessman then gave them Rs 1.1 lakh. The accused had further demanded Rs one lakh more from the victim. The businessman contacted the office of the CID at Siliguri and came to know that there were no such officers in these names. He told the CID officers about the matter. The CID officers in the district asked the victim businessman to call up the three accused on pretext of giving money to them. As advised by the senior CID officers, the businessman called up the fake officers saying that he was ready to give them the money and asked them to come to a particular place. When the three accused came to the place, they were arrested by CID sleuths. It is suspected that the accused used to extort money from the businessmen in the area and a probe has been started in this regard. The CID officers also seized the mobile phones of the three accused
Read more at: http://www.millenniumpost.in/kolkata/kolkata-247189 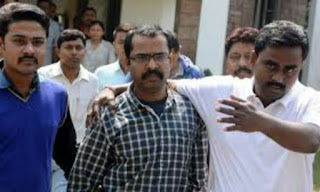