- June 06, 2017
We have gradually reached an era where there seems to be no existence of humanity; at least this is what is apparently visible considering the heinous crimes happening against women and kids.
Shockingly, gang-rapes seem to have become so common that you may stumble upon a couple of news of the same every week but what if brutality with babies is also involved at the same time? Yes, the recent dreadful incident which happened on 29th May in Gurugram took inhumanity to a new level. Three men not only gang-raped a woman of 23 in a moving autorickshaw but also murdered her nine months old little daughter who was thrown out of the rickshaw as she was “distracting” the rapists.
Even though this appalling incident took place on 29th May and an FIR of the baby’s murder and molestation was filed, it was on 5th June that the woman disclosed the shocking account of the dreadful happening.
The Tribune was told by an officer who is investigating the case that the woman neither revealed anything with regard to the incident nor wanted to undergo medical tests. Different statements came from her and hence, cops have lodged an FIR for molestation, rape and common intent under relevant sections. As per the officer,
“It was only today that she broke down and revealed that she had been gang-raped. We are currently investigating the matter and will be able to reveal the details after preliminary medical examination.”
The woman hailed from a village close to IMT Manesar and she told that on 29th May, there had been a big quarrel between her and her husband after which she set out for her parents’ house with little baby. She boarded an auto in which three men were sitting. Here’s what she informed cops,
“It was on the Khandsa road that they started touching me. I ignored them for sometime but soon they started molesting me. When I objected all three of them attacked me. My daughter was in my lap and she started crying. They snatched her away and threw her on the road saying she was spoiling their fun. The trio then gang-raped me and dumped me.”
As per a relative of the victim,
“She was in a state of shock over her daughter’s death and she did not tell the police about the rape at that time. She could not muster courage for a medical test as she had to cremate her child. She has been in shock for the last many days.”
Sketches of all those three accused are prepared and the cops are searching for a video of the recording which might help them in catching the accused. 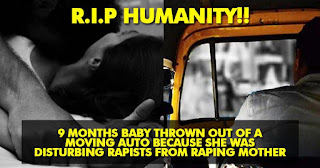