'No helmet, no petrol' & now 'no pollution certificate, no petrol' - New rule in planning by Bengal govt

- June 07, 2017
The state government is planning to introduce a new policy in which any vehicle without the mandatory PUC (pollution under control) certificates will be denied fuel by petrol pumps.
The proposal to keep a check on air pollution caused by emission of smoke by vehicles is on the lines of the "No Helmet, No Petrol" campaign launched by the state to promote safe two-wheeler riding.
Petrol pump owners said it wouldn't be easy to implement the "No PUC, No Fuel" policy.
Sources said the proposal had been mooted by the state environment department at the instruction of the minister in charge, Sovan Chatterjee.
"Accordingly, a letter has been sent by the traffic branch headquarters at Bhabani Bhavan in Calcutta to all police commissioners and superintendents in the state. They have been asked to check the number of vehicles which come to petrol pumps with valid PUC certificates and explore the possibility of introducing the new policy," a source in Jalpaiguri district police said.
The PUC certificate is issued to any vehicle running on petrol and diesel by authorised pollution testing centres. The certificate, issued after checking the smoke emission levels of vehicles, is valid for six months.
Any vehicle that is not carrying a valid PUC certificate is liable to face prosecution under Section 190 (2) of the Motor Vehicles Act and its owner will have to pay a penalty of Rs 1,000 for the first offence and Rs 2,000 for every subsequent violation.
Today, police officers posted in the traffic wing in Jalpaiguri town held a meeting with the owners of petrol pumps and sought their opinion.
A section of petrol pump owners said implementing the policy was easier said than done.
"After the 'No Helmet, No Petrol' drive was launched, we have come across a number of incidents where riders without helmets have abused and humiliated employees of pumps for refusing to fill two-wheelers' tanks. Such incidents will happen if the new policy is also launched. It would be a time consuming and complicated process for employees to check the PUC certificate of each vehicle," said a pump owner.
Telegraph 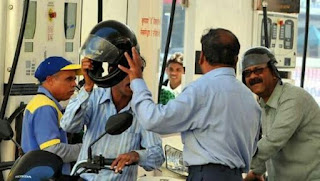