- June 21, 2017
Workers of Kiranchandra Tea Estate blocked NH31C near Bagdogra for over seven hours, protesting the alleged assault on two labourers by the garden's assistant manager yesterday.
The workers demanded removal of the assistant manager and also the garden manager.
"Last night, the workers had assembled near the factory and alleged that an assistant manager had assaulted two labourers. They had also hurled stones at the management staff and ransacked the garden's office," a source said.
A worker, while staging the blockade, said: "Two workers were badly beaten up by the assistant manager for no reason. We want him and the manager to be removed. Also, police should take steps against the attacker."
Traffic movement along the Bagdogra-Naxalbari stretch of the highway that touches the India-Nepal border at Panitanki, was at a standstill till afternoon.
The roadblock was lifted only after officials of the Naxalbari block administration assured necessary steps to the workers.
"The demonstration continued till 7pm yesterday. Kinsuk Maity, the block development officer of Naxalbari, held a meeting with representatives of the garden management and workers' unions," the source said.
"At the meeting, it was decided that the management will remove the accused attacker from the garden," the source added.
Maity said the garden management will bear the medical expenses of both the workers who have reportedly sustained injuries. "It has been also decided that the management will take steps against the accused assistant manager. The workers have assured to join work from today," he said.
Representatives of the garden's management could not be contacted.
Kiranchandra estate is around 20km from here.
Telegraph 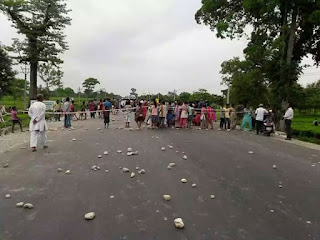