- June 06, 2017
Bimal Gurung today said the Gorkha Janmukti Morcha would go ahead with the agitation despite Mamata Banerjee's announcement that Bengali would be an optional subject at schools across the hills and in certain pockets of the Dooars and the Terai.
"She does a flip-flop on every issue. Just a few days back, she had said everyone in the state had to take up Bengali language. Looking at the public resentment in the hills against her announcement, she is trying to normalise the situation. However, until her cabinet takes a decision and comes up with a written statement that Bengali will not be mandatory in the hills, we will not rest," said the Morcha president said here.
The Morcha had earlier said it would hold processions across the hills with black flags to protest the state government's decision to make Bengali compulsory at schools. The marches have been lined up from June 4 to 9 to synchronise with the chief minister's tour of the hills.
"We will also go ahead with the rally in town tomorrow. We have announced our agitation till June 8 and on that day, we will make further announcements," said Gurung.
Police had yesterday said no permission would be granted to the Morcha to hold rallies in Darjeeling and Kurseong on June 6, 7 and 8 "since there will be movement of a lot of ministers for a government event".
The Morcha doesn't think of an immediate change in its plan and seems to be turning the agitation into a bigger movement for statehood.
"There is this issue of language policy in Nepali dominated areas and schools in the Dooars and the Terai. These areas must also be left out of her decision. Moreover, the issue here is her motive to continuously undermine the hill people," said Gurung.
He broached lingering issues to justify the need to carry on with the agitation.
"We have worked with her in the past and we know her nature. She addresses the hill people in a different manner but her intentions are different. Look at the GTA. The (GTA) Act was passed almost five years back, but most of the departments have not yet been transferred... had she said Bengali would be an optional language in the beginning, this would not have been an issue with us," said Gurung.
The Morcha leader said it was time to dump the GTA. "We will live for Gorkhaland and die for Gorkhaland now. In the next 10-15 days, all our GTA Sabha members will submit a resolution (resignation)," said Gurung.
Morcha assistant secretary Binay Tamang said the party would observe a 24-hour strike in Mirik and Soureni GTA constituencies from 6am on June 7 if Purna Singh Rai, a Morcha leader from Soureni, was not released unconditionally by 6pm tomorrow. He was held for showing black flags to Mamata while she was on her way to Mirik.
By Vivek Chhetri, Telegraph 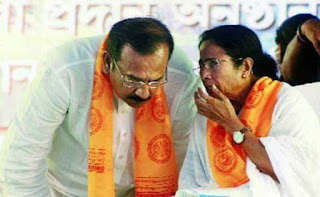