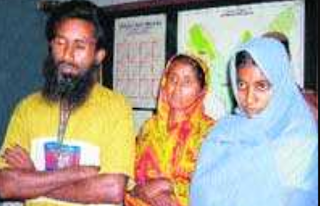 A 36-year-old man married his teenage daughter and made her pregnant, justifying his perverse act by claiming he had divine sanction for his incestuous lust. What's even more galling is that his wife was the prime witness in the nikah of her daughter to her husband.
Afazuddin Ali's wedding happened quietly and understandably without fanfare, so none in Kasiajhora village of Jalpaiguri district knew. But now, six months later, as the girl showed signs of pregnancy, eyebrows were raised, tongues started wagging and word finally got out.
Outrage and anger swept across the village and there was even talk of attacking the family. Sensing that things could quickly get out of control, cops from the Banarhat police station rushed in and arrested Ali, his wife Sakina and their 15-year-old daughter.
The three were taken to an SDO's court on Monday but the hapless magistrate had to release them because he had no criminal jurisdiction; there was no complainant and police strangely did not bring a case of statutory rape against Ali.
"Police has not lodged any specific case and the court does not have jurisdiction over criminal cases. So they were released unconditionally," said the SDO, Atanu Kumar Ray. (TOI)