- June 24, 2017
India women’s cricket team launched their campaign at the ICC Women’s World Cup with a comfortable 35-run win over England, riding on superb batting display by the top-order on Saturday.
Put into bat, Smriti Mandhana struck a sizzling 90 off 72 balls in a dominating batting display as India posted an imposing 281 for three after being asked to bat.
Mandhana forged a 144-run opening wicket stand with Poonam Raut (86 off 134) before skipper Mithali Raj (71 not out) completed an unprecedented seventh consecutive half century in ODIs.
It is India’s first win over England in five years as they had all lost all six previous matches to the hosts.
Chasing 282 to win, England failed to build partnership with middle-order batswoman Fran Wilson (81 off 102) emerging as the highest scorer. Her run out proved turning point of the game since England looked crusing when she was at the crease.
Off-spinner Deepti Sharma took three wickets for 47 runs.
Earlier, Indian openers Mandhana and Raut batted for 26.5 overs. While Raut was solid at the other end, Mandhana was out to attack from the word go.
Mandhana was a last-minute inclusion to the squad after she recovered from an Anterior Crucial Ligament (ACL) injury she suffered during the Women’s Big Bash in January. The 20-year-old during her whirlwind effort showed what she was worth the selection. She was majorly responsible for giving India a flying start as the team reached 59 in 10 overs.
However, things slowed down in the next 10 overs with India reaching 97 for no loss in 20 overs. If it was not for that period, India could have easily crossed the 300-run mark.
Captain Raj then joined Raut in the middle and carried on with her rich vein of form to take India to a competitive total. 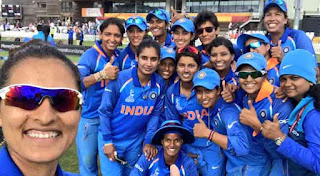