- June 14, 2017
West Bengal Chief Minister Mamata Banerjee on Wednesday met Governor Keshari Nath Tripathi in Raj Bhawan and the government appointed C Murugan as the new secretary of Gorkhaland Territorial Administration (GTA) in the backdrop of the ongoing unrest in Darjeeling hills.
Murugan, who was the managing director of Tourism Development Corporation, will replace Donbosco Lepcha and will take over charge as GTA secretary immediately, a notification issued on Tuesday by personnel and administrative reforms and e-governance department said.
Banerjee met Tripathi possibly to brief him about the situation in the hills, sources said. The state government had earlier replaced GTA principal secretary Ravi Inder Singh and brought in Barun Ray.
Sources in the secretariat said that Singh was removed following numerous corruption charges against Gorkha Janamukti Morcha (GJM) chief Bimal Gurung-led GTA and its members.
The notification said Lepcha will now be the secretary of the first land acquisition collector and collector, stamp duty, Kolkata.
Deepap Priya P, who is presently the chief executive officer of Siliguri-Jalpaiguri Development Authority, will hold additional charge of executive director of GTA, the state government notification said.
Tanmay Chakrabarty presently the joint secretary of the tourism department would hold additional charge of managing director of Tourism Development Corporation, it said.
The hills are on the boil since 8 June when GJM supporters clashed with the police when they tried to break barricades near the Rahj Bhawan, where Banerjee was holding a cabinet meeting. As police resorted to lathicharge, miscreants damaged police vehicles and set some of them ablaze.
GJM has revived its separate Gorkhaland demand and its indefinite bandh in Gorkhaland Territorial Administration and state government offices in Darjeeling entered its third day on Wednesday. 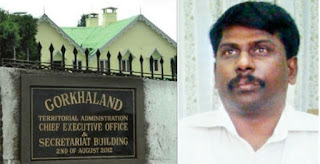