- June 04, 2017
The Gorkha Janmukti Morcha asks residents of Mirik to switch off lights for two hours today evening when Mamata Banerjee will attend a government programme there.
The Morcha also appealed to students and people to wear black badges during the chief minister's tour of the hills as part of an intensified agitation against the state government's decision to make Bengali learning compulsory at schools.
Binay Tamang, the assistant secretary of the Morcha, said: "We call upon people to switch off lights for two hours from 6pm tomorrow to protest against the imposition of Bengali language on the hill people. We will think that those who don't switch off lights are against Gorkhaland and our language."
The chief minister is slated to attend a government programme at Mirik from 5pm tomorrow.
Morcha general secretary Roshan Giri said the blackout would be restricted to Mirik.
Morcha president Bimal Gurung, along with senior leaders, took part in a march from Ghoom railway station to Chowk Bazar in Darjeeling, a distance of about 8km, today to protest against the language issue.
Mamata will be in Darjeeling for four days from Tuesday. The state cabinet is scheduled to meet in Darjeeling on Thursday.
The Morcha has lined up marches across the hills during the chief minister's tour of the region.
"We request students from Class V onwards to wear black badges at schools till June 9. We also appeal to general public to move around with black badges," said Giri.
Amit P. Javalgi, the superintendent of police, Darjeeling, said permission would be denied to the Morcha to take out processions in Darjeeling and Kurseong on June 6, 7 and 8 "since there will be the movement of a lot of ministers for a government event".
"They could hold processions at other places," added Javalgi.
The police chief said: "We had given permission to hold rallies today. We are giving them (Morcha) permission to organise marches tomorrow (even in Mirik) on condition that they should be peaceful and democratic and should not disturb any government programmes."
Giri said the marches would be peaceful and the Morcha would seek permission for the same in Darjeeling and Kurseong on June 6, 7 and 8.
He asked people to attend a rally from Gorkha Rangamanch Bhavan to Chowk Bazar in Darjeeling on June 6 in traditional attire. Gorkha Rangamanch Bhavan is about 1km from Richmond Hill where Mamata would be staying during her visit.
In Siliguri, BJP national general secretary Kailash Vijavargiya said the state government should have held talks with those who had reservation about the language decision.
"Instead, the state decided to impose a language on the hill people which led to the agitation. Their sentiments have been hurt. The state has made an undesirable move in a democratic system," he said.
Minister Gautam Deb today said in Siliguri: "People are not supporting the Morcha's agitation. Trinamul supporters are relentlessly working to build opinion against the movement. Bimal Gurung is fast losing his support base in the hills and is trying to retain it by duping people."
He said Mamata would reach Bagdogra today and head for Mirik.
By
Vivek Chhetri and Bireswar Banerjee
Telegraph 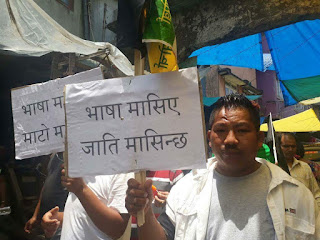