- June 07, 2017
TROUBLE IS brewing in North Bengal with GJM chief Bimal Gurung on Wednesday saying that the movement for a separate Gorkhaland will start soon. “In the next few days, the Gorkhaland movement will start. The people of the hills are still with the GJM. We are unitedly fighting for Gorkhaland,” PTI quoted Gurung as saying.
“Trinamool Congress is trying to dilute the real issue of our identity by trying to bribe us through various doles,” he added. With the GJM set to revive its agitation for Gorkhaland in Darjeeling and surrounding areas, leaders of Morcha — an ally of the BJP — are soon likely to resign from the Gorkhaland Territorial Administration (GTA), a semi autonomous administrative body in the hills, which is at present under the control of GJM.
Following Trinamool’s recent victory in the Mirik municipal polls, the party is looking for a share of the political space in the hills, where GJM had till now ruled supreme. Chief Minister Mamata Banerjee is scheduled to hold her first Cabinet meeting in Darjeeling on Thursday.
“We met the Governor (Keshari Nath Tripathi). We also met state BJP leaders in Kolkata. We informed them about the situation prevailing in the hills and will intensify our movement for Gorkhaland,” GJM general secretary Roshan Giri said.
BJP state president Dilip Ghosh, after his meeting with GJM leaders in Kolkata on Wednesday, said: “The GJM leadership is unhappy with the state government. They said the state government has failed to keep its promise and GTA has become powerless in undertaking developmental works. They have told us that soon, they will resign from the GTA and re-launch the movement for a separate state of Gorkhaland. They feel cheated.”
“We are with the GJM. However, the issue of a separate state is a matter (to be decided) by the central government,” he added.
Besides Giri, the delegation that met Ghosh included MLAs Sarita Rai (Kalimpong), Amar Singh Rai (Darjeeling) and Rohit Sharma (Kurseong) and GJM central committee member Swaraj Thapa.
The GTA agreement was signed between the GJM and the state government in July 18, 2011. In July 2012, elections to the 45 constituencies in the hills were swept by the GJM. Recently, trouble broke out in the hills after Mamata made Bengali compulsory from Class I to IX in all schools. GJM went on to oppose the move.
BJP state secretary Sayantan Basu said: “We feel that one should study Bengali language in Bengal. But it should not be forcibly imposed on someone.”
On Monday, Mamata — who is currently camping in the hills — had announced a number of developmental initiatives for the region and a “special audit” of GTA funds, further antagonising the Morcha. Sources said a section of the GJM leadership is also unhappy with the BJP and wants the party ruling at the Centre to expedite the process for a separate Gorkhaland.
By: Express News Service 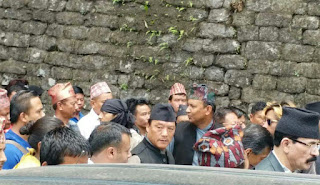