- June 07, 2017
Chances of a scuffle hang heavy in the air with the Gorkha Janmukti Morcha (GJM) announced a sit-in demonstration in front of Gorkha Ranga Mancha Bhawan in Darjeeling on the way to the Raj Bhawan which is the venue for the state cabinet meeting on Thursday. The state Cabinet is scheduled to meet at the Raj Bhawan at 2 pm. GJM president Bimal Gurung on Wednesday announced the agitation programme for Thursday. "There will be GJM protest rallies from Batasia Loop, Darjeeling Railway Station and Singamari. The rallies will culminate in front of Gorkha Ranga Mancha Bhawan where the protestors in huge numbers will be staging a two-hour long sit in demonstration," stated Gurung. The Ranga Mancha is a few yards away from the Raj Bhawan, both located at the Chowrasta. The sit-in demonstration is scheduled to take place from 12.30 pm to 2.30 pm on Thursday coinciding with the state Cabinet meeting which is scheduled to commence at 2 pm in the Raj Bhawan premises. The CM has instructed the ministers to come in from Siliguri and return to Siliguri after the meeting so as not to create any inconvenience to the tourists. With the rallies and the sit in demonstrations, the cavalcades of the ministers could find it difficult to negotiate. The GJM is on an agitation path protesting against the three language policy of the state government which they have dubbed the forceful imposition of Bengali language in the Hills. Despite CM Mamata Banerjee's assurance that Bengali will be an optional subject in the Hills, the protests continue. The police avoiding confrontation have been allowing protest rallies without permission from the district administration and police. However, the situation could turn fluid on Thursday feel political observers. "We do not believe in the CM's word of mouth. She changes her statements frequently. We want the state cabinet to adopt a resolution on Thursday that the Hills, Terai and Dooars will be exempted from having to study Bengali. If they do it, well and good, otherwise, we will continue with our agitation," stated Gurung. But the state government has not yet tabled a three language policy Bill. Thus, a demand for a roll back for the Hills is baseless. He stated that the GJM will hold another meeting on Thursday to decide on the future course of action. "The future agitation programmes will depend on whether the Cabinet adopts the Bengali language exemption or not," added Gurung. Wednesday saw GJM protest rallies in the day and a fire torch rally in the evening. Gurung, however, did not announce any Gorkhaland agitation programmes on Wednesday. Meanwhile, the three GJM MLAs along with GJM general secretary Roshan Giri are in Kolkata meeting the Governor, the Assembly Speaker and the BJP state president over the language issue. Chief Minister Mamata Banerjee on Wednesday visited Tiger Hill, the famous sunrise point, 11 km from Darjeeling. The Tourism department is constructing tourist cottages at Tiger Hill.
Amitava Banerjee, Millennium Post 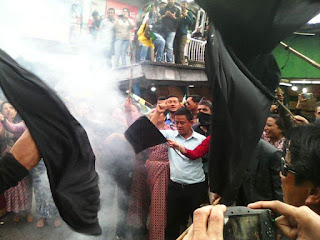