- June 12, 2017
BJP leadership in Delhi is planning to send a central team to Darjeeling by end of this month to assess the current political situations in the Hills.
The Gorkha Janamukti Morcha (GJM) is holding an indefinite bandh in Darjeeling since Monday demanding a separate statehood for which they have been fighting for long.
Even though, the main purpose of the current bandh by the GJM is to mount pressure on Mamata Banerjee's government, sources in BJP here said that their central leadership is worried because of the GJM's renewed movement for separate statehood.
"It is the Union government which is capable of considering such a demand and our leadership is keen to hold talks with the GJM even though they are opposed to their demand for a separate Gorkha state. As far as I know, a central team will visit Darjeeling soon to assess the current political situations and to hold talks with the GJM leadership," a senior BJP leader told ET on Monday preferring anonymity.
BJP's Bengal unit has blamed chief minister Mamata Banerjee for the recent turmoil in Darjeeling.
"The recent spate of violence in the Hills is happening due to mishandling of the issue by the chief minister. In the name of setting up development boards, the chief minister has practically encouraged divisions among the Hill people. We don't support demand for separate statehood. But we feel that none but the chief minister herself is responsible for the current unrest in Darjeeling," BJP state president Dilip Ghosh said.
BJP insiders, however, said that the party could not evade their responsibility in case the GJM continues their stir for getting a separate state as the party won Darjeeling lok sabha seat in 2014 with support from the GJM and the MP from Darjeeling S.S.Ahluwalia is now a Union minister.
"We run the government in Delhi. We have won Darjeeling lok sabha seat and the MP is now a minister. Naturally, it is the duty of our government in Delhi and responsibility of our minister to listen to the GJM leadership and try to find out a suitable solution. The central team will visit Darjeeling for the same purpose," said the senior BJP leader.
By Tamal Sengupta, ET Bureau
In Pic: A state-government bus in flames after it was torched miscreants in Darjeeling. 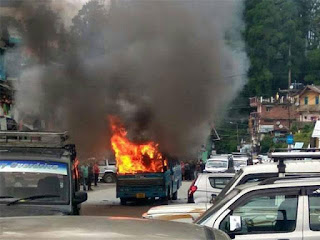