- June 04, 2017
Rinchen Sherpa of Sirwani Singtam East Sikkim, was intercepted at Rangpo CP with alleged possession of 144 capsules of Spasmoproxyvon, 233 tablets of Nitrosun 10 and one bottle of prohibited cough syrups. He is a driver and was on his way to Gangtok from Siliguri by driving a taxi vehicle bearing No. SK01T/3957, Alto.
On the recovery of controlled substances, a criminal case vide FIR no 39/2017 DTD  04/06/17 under SADA 2006 has been registered against the above named accused person.
Further, he was earlier also involved in SADA case at Singtam PS  vide FIR no 71/2016 DTD 05/12/16 u/s 7/9/14 of SADA 2006 and is in court bail. 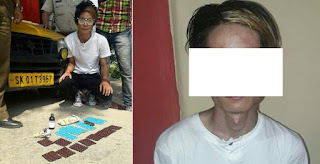