- June 12, 2017
Sporadic incidents of violence marked the early hours of the Gorkha Janmukti Morcha's (GJM) indefinite strike in Darjeeling on Monday, amid massive security arrangements.
The regional party had on Saturday called for a shutdown in the northern West Bengal hills, demanding a separate Gorkhaland.
Early on Monday, the Block Development office (BDO) in Darjeeling's Bijanbari was torched, allegedly by a group of GJM activists.
Three activists were arrested in connection with the incident, according to police.
"The situation is under control. Three persons have been arrested for trying to incite violence," a senior police officer said.
While calling for a strike in Darjeeling and Kalimpong, the GJM leadership accused the West Bengal government of "high-handedness and committing atrocities" on the people of the hills.
The GJM is also protesting against, what it calls, the state government's "attempt" to impose Bengali on the Nepali-speaking people of the region, even though Chief Minister Mamata Banerjee has ruled out any such plans for the hills.
"All central and state government offices, banks, Gorkhaland Territorial Administration offices will be closed as part of the shutdown from Monday. Block Development Offices, Sub-divisional Offices and District Magistrate's offices will also be closed," GJM General Secretary Roshan Giri had said on Saturday.
Educational institutions, transport and tourism — hotels, restaurants and shops — have been kept out of the purview of the shutdown.
However, on Sunday, GJM chief Bimal Gurung "advised" tourists to leave the hills, saying the situation could deteriorate.
To avert any ugly turn of events, massive security arrangements have been put in place at all important roads and public offices.
Six columns of the army have been deployed in Darjeeling, Kalimpong and Kurseong towns since Thursday.
State police along with CRPF and combat force personnel were seen manning the important and critical points in Darjeeling wearing protective body armour and helmets.
Meanwhile, the famous toy train service in Darjeeling was kept shut considering the possible security threats to the tourists.
IANS 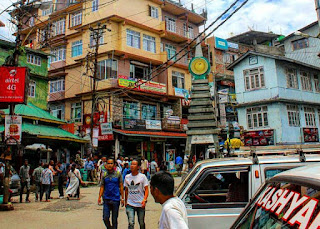