- June 21, 2017
In a turn of events, the Darjeeling police have booked Bimal Gurung and his wife Asha for the death of three Gorkha Janamukti Morcha activists.
The murder charge is certain to stoke up the tension and intensify the battle between the elusive GJM chief and CM Mamata Banerjee.
Police sources said the three GJM supporters were not killed in police firing and were killed by their own colleagues when they opened fire at the forces in Shingmari last week.
"Police did not fire, but people were killed. GJM cadres were killed when bullets were fired from their side. At least seven police personnel sustained injuries," said a police official, refusing to be identified. The FIR was confirmed by the police as well as the GJM legal wing.
The FIR includes names of 24 members of the party, including Bimal and Asha Gurung. Asha leads the GJM women's wing. The FIR also explained why the Gurungs and some other top leaders of the Darjeeling agitation went underground.
Gurung, his wife, GJM general secretary Roshan Giri and their 25 colleagues were also booked in two attempt-to-murder cases, lodged on June 9 and 17. Since June 9, at least 33 cases have been lodged against the GJM leaders.
In Darjeeling town police station, at least 17 cases were lodged against senior GJM leaders. The cases include charges of rioting, damage of government property, arson and stone pelting.
The GJM leaders are now leading the movement from undisclosed hideouts through video clips which are being played on local TV channels since the police snapped the internet connectivity in the region. The West Bengal Police have been consistently claiming that it exercised extreme restraint in dealing with the GJM-led unrest since it broke out on June 8.
They maintained that the agitators have been dealt with teargas, rubber bullets and batons. The CRPF and the army columns were armed but had specific instructions about resorting to firing only under extreme circumstances.
GJM leaders, on the other hand, plans to sue the police. "They have started murder cases against our leaders, saying that the party has killed its own cadres. It's so silly and stupid. Why should we kill our own people?" wondered GJM central committee member Amar Rai. "We will lodge a counter case and will fight against this injustice."
Via: Economic Times 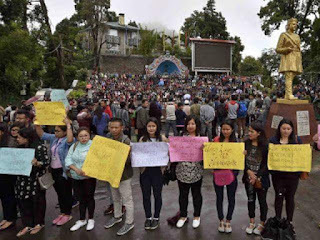