- June 16, 2017
The West Bengal CM shouldn't underestimate Bimal Gurung, he may have his own army.
"The hills are smiling," West Bengal chief minister Mamata Banerjee had tweeted last month after the Trinamool Congress (TMC) won the municipality polls in Mirik, long considered the stronghold of the Gorkha Janmukti Morcha (GJM).
Her assertion that the hill people are satisfied with the state government has been made repeatedly since Banerjee came to power in 2011. However, today the situation has changed drastically. There has been a breakdown of relations between the TMC and the GJM, with the latter renewing its call for statehood.
And it all started with Didi announcing that Bengali would be a compulsory language from Class 1 onwards. By the time she added the caveat that the hills are exempted from it, it was too late. The GJM had already taken up the cudgels against the state government. Gorkhaland supporters are clashing with the police, tourists have fled and the hills are under a lockdown.
Banerjee had worked tirelessly to ensure that GJM chief Bimal Gurung toed the line. After three years of agitating against the erstwhile Left government, Banerjee finally appeased the GJM when she took over as chief minister from Buddhadeb Bhattacharya.
Gurung agreed to the formation of the GTA in September 2011. Didi had brought peace to the hills. But her decision to order a special audit for the GTA fund earlier this year left Gurung livid. A gutsy call by Banerjee whose party is mired in Saradha and Narada controversies.
The Gorkhaland Territorial Administration (GTA) is a semi-autonomous administrative body for Darjeeling, Kalimpong, Mirik and some parts of Siliguri in West Bengal. With the GTA elections slated for this year, both sides are looking to flex their muscles. The heightened unrest in the hills and the harsh rhetoric being used by both leaders suggest an impending clash. Already the police have raided Gurung’s residence and other areas; the Mamata Banerjee government is not in the mood to blink. Banerjee will not allow for the bifurcation of the state under any circumstances.
While covering the GJM agitation in 2009-2010, my impression of Gurung was that he wouldn’t back down from a fight. He’s come up the hard way and admits that he has promises to keep. He was assuaged by the GTA for six years and doesn’t intend to give it up. During the last agitation, Gurung had trained around 11,000 young men and women as foot soldiers terming them “peacekeepers”.
Dressed in army fatigues, a handful of them stood protecting their leader as he chatted with them nonchalantly. Their only job was to ensure the GJM’s various diktats (dress in ethnic clothing, banning of mobile phones and bikes etc.) For this training and unflinching loyalty, Gurung was reportedly spending Rs 10 lakh a month. If Banerjee threatens to take power away from him, he may deploy his foot soldiers and unleash havoc on the hills hitting both tourism and daily life.
Meanwhile, Gurung has received support from the BJP that has been steadily increasing its footprint in the state, and especially in the hills. It will be interesting to also see how Prime Minister Narendra Modi and his party handle the situation. They have for long been supporters of the creation of smaller states, and have supported the GJM call for autonomy in the hills.
Gurung believes that the BJP-led Centre would consider its demand for a separate Gorkhaland “compassionately”.
If Banerjee doesn’t pull a rabbit out of the hat soon, the situation may completely go out of hand. Unless she changes her approach, she could be pushing GJM and BJP closer together. Not to mention the insurmountable economic loss to the exchequer due to the ongoing shutdown.
The West Bengal government as well as the TMC can do without the agitation exploding into a larger crisis; and only "an iron hand in a velvet glove" approach can work.
The views and opinions expressed in this article are those of the authors and do not necessarily reflect the official policy or position of DailyO.in or the India Today Group. The writers are solely responsible for any claims arising out of the contents of this article.
Writer
Shutapa Paul SHUTAPA PAUL @shutapapaul
The writer is a journalist and media entrepreneur.
Dailyo.in 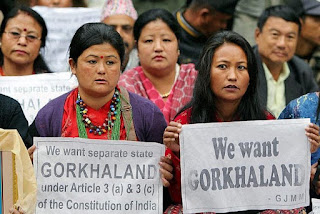