Darjeeling party meeting update: Strike to continue until army not sent back , GTA to be scraped

- June 20, 2017
The joint meeting held in Gymkhana Club organised today was concluded with the formation of a core committee of All India coordination commitee on Gorkhaland for continuing the movement for Gorkhaland.
Intellectual and ex-civil services officer P. Arjun addressed media after the meeting was over.
The following resolutions were taken in the meeting:
1. All parties unanimously decide to continue with the strike.
2. None of the parties will take part in the all-party meeting called by the state government on the 22nd in Siliguri.
3. GTA will be scrapped.
4. No party will take part in GTA election in future
5. The state government should resume internet services in the hills with immediate effect.
6. Further talk with central government on Gorkhaland Issue only
7. Strike shall be withdrawn only if armed forces are withdrawn.
8. Tilak Chandra Roka has been nominate as the coordinator of the core committee.
The third joint meeting has been called on June 24. 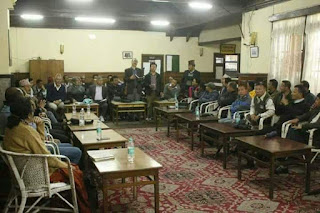