- June 14, 2017
New Delhi: Amidst the escalating protests in Darjeeling and adjoining areas, Minister of State for Agriculture SS Ahluwalia has written to Home Minister Rajnath Singh to examine the demand for a separate hill state Gorkhaland.
Sources in the Home Ministry have told CNN-News18 that Ahluwalia, who won Lok Sabha elections from Darjeeling on BJP ticket with the support of Gorkha Janmukti Morcha (GJM), met Singh and the Home Secretary earlier this week in Delhi and drew the attention of the ministry on the escalating crisis in his constituency.
This is for the first time that a senior BJP leader has gone on record in a communication to the government to seek intervention on the core issue of the formation of a separate state from West Bengal. 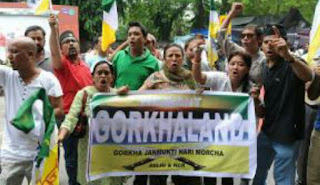 Sources in the BJP say that Ahluwalia has also communicated with the Party President Amit Shah on this issue.
In its manifesto for 2014 general elections BJP had said “it will sympathetically examine and appropriately consider the long pending demands of the Gorkhas, the Adivasis and other people of Darjeeling district and the Dooars region; of the Kamtapuri, Rajbongshi and other people of North Bengal (including recognition of their language)”.
GJM, which is spearheading the separate statehood campaign now, currently controls the Gorkhaland Territorial Administration (GTA). It is also the main challenger to the ruling Trinamool Congress which has for long attempted to make inroads in the region.
In the process, GJM has tactically leveraged its stakes at the center vis-à-vis the state government by supporting a national party in the Lok Sabha polls. In 2009 general elections, it supported former Defence Minister and BJP leader Jaswant Singh.
The GTA was formed in 2012 after a tripartite agreement was signed between the state and union government and GJM which had been agitating for a separate hill state. The agreement led to the passage of a bill by the West Bengal Assembly delegating administrative and financial powers to the council. The state government, however, retained legislative powers with itself.
The latest round of protests were triggered by GJM’s opposition to Chief Minister Mamata Banerjee’s decision to implement three language policy in the state making Bangla compulsory in at primary and secondary levels. GJM sought exemption from the rule in the Nepali speaking areas of the state.
Amidst the unrest, and in a challenge of sorts, Banerjee also travelled to the hills earlier this month to hold the maiden meeting of her cabinet in Darjeeling. Former chief minister SS Ray had done the same at the peak of Naxal movement 34 years ago to send across a message that all was well and under control.
The anti-language movement soon metamorphosed to reignite the separate statehood demand with all political parties in the sub-division passing a resolution on Tuesday seeking to separate from West Bengal.
In his missive to Singh, Ahluwalia has also sought the State Government should through an executive order exempt Nepali speaking areas from compulsorily studying Bangla.

In picture: Activists of Gorkha Janmukti Nari Morcha shout slogans during a protest at Jantar Mantar in support of a separate state of Gorkhaland, in New Delhi. 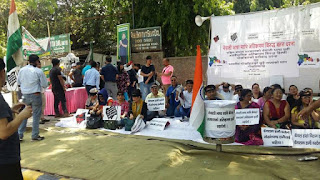