- June 15, 2017
CENTRE, BENGAL, GORKHA LEADERS TO HOLD TRIPARTITE TALKS ON JUNE 19
The Ministry of Home Affairs has said tripartite talks between West Bengal government, Centre and Gorkha leaders will be be held in New Delhi on June 19.
The West Bengal government has demanded 400 additional central forces for the ongoing Gorkha agitation in Darjeeling. The Centre had earlier sent 1100 central forces.
[Via: The Hindu]
[In Pic: Locals being stopped from coming near GJM chief Bimal Gurung's house in Darjeeling.   | Photo Credit: Shiv Sahan Singh] 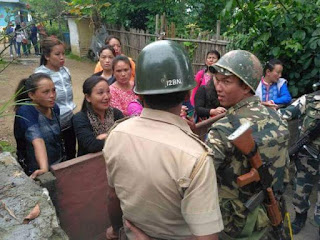