- June 19, 2017
The Border Security Force (BSF) has seized fake Indian currency notes of the face value of Rs 1.96 lakh and apprehended a person, who was carrying the FICN from Sabdalpur border outpost in Malda district.
A BSF team observed a person coming through link road Khumbhira to Gulabganj last evening. The BSF team detained the person and after thorough search of him, one bundle of fake currency notes were recovered from his possession, a BSF release said today.
On opening the packet, FICN of face value of Rs 1.96 lakh in the denomination of Rs 2000 notes were found, the release said.
On preliminary questioning the apprehended miscreant revealed his identity as Nijamul Haque (20 years), a resident of Ghera Bhagabanpur village in Malda district.
The apprehended person and seized FICN has been handed over to Baishnabnagar police station for further legal action.
The South Bengal Frontier of BSF has seized FICN of face value of Rs 29,92,000 (including this seizure) and apprehended four FICN smugglers and carriers during this year, the release added. 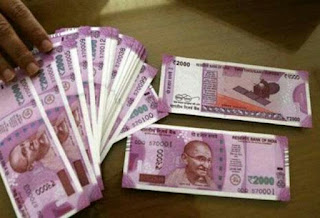