- June 04, 2017
The Border Security Force (BSF) has seized FICN with a face value of Rs 4.98 lakh from Malda district, a BSF release said today. The BSF had planned a special ambush on June 3 night after the officials received an information regarding smuggling of FICN in Mirik-Sultanpur near the Indo-Bangla border.
Around 11.45 pm yesterday the BSF's operation party observed some movement on both sides of the fence. The miscreants on the Bangladesh side threw one packet over the fence. The miscreants from Indian side tried to collect the packet.
Immediately, the BSF's ambush party challenged the miscreants on the Indian side and chased them. At this, the miscreants fled the scene. The ambush party recovered one packet after carrying out a thorough search.
A total number of 249 FICN with a face value of Rs 4.98 lakh in denominations of Rs 2000 notes were found in the packet. The seized FICN was handed over to the Kaliachak police station for further action, a BSF statement said.
The BSF's South Bengal Frontier has seized FICN of face value of Rs 27,96,000 (including this seizure) and apprehended three smugglers during the year 2017. 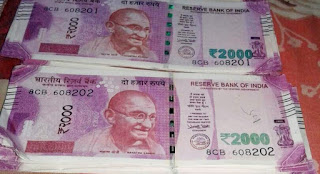