- June 03, 2017
With India and Pakistan all set to take on each other in the much awaited match today at the Edgbaston Cricket Ground, fans of the men in blue in Delhi and Punjab cannot wait for the battle to start and watch their team crush the arch-rivals.
"Our hopes are high. India has defeated Pakistan many times and I am sure Pakistan will taste defeat this time too. I am going to enjoy Virat's sixes. We are hoping a high performance from him," said one of the many cricket fans in Delhi, who are praying for skipper Virat Kohli to strike gold with his bat.
Another fan from New Delhi asserted that Pakistan would definitely lose the match.
"I am fasting for Ramadan and I am fasting for my nation; my nation will only win. We have a young team and we will beat Pakistan outrightly," a fan from Jammu and Kashmir said.
Fans, however, would not be able to enjoy a small yet intriguing battle between Virat Kohli and Junaid Khan as the left-arm pacer has not been included in the 12-men Pakistan squad for the high-octane clash.
Junaid and Kohli have faced-off quite a few times in the past and the Indian star has managed to score just 2 runs off 22 balls in ODIs. While Junaid has also dismissed Kohli three times and has also bowled 21 dot balls in the 50-over format.
And thus, his exclusion from the playing XI does surprise everyone.
However, Pakistan skipper Sarfraz Ahmed defended his decision of excluding the left-arm pacer on the eve of the match, saying, "It was four-five years ago that Junaid dismissed Kohli. But those conditions were different. But what has suited us, according to that we have picked our top 12."
Ahmed claimed that India, who are being termed as the clear favourites for the match, will be under pressure and not Pakistan.
India won the last Champions Trophy in 2013 and head into the marquee event as favourites after a hugely successful home season with 10 Test wins.
The Men in Blue are number one in the Test rankings after series victories over New Zealand, England, Bangladesh and Australia, and would hope to carry that form into the Champions Trophy.
"It is true that on papers India are better than us but in today's times game has changed. Whosoever plays better on the particular day, will win the match. On the other hand, it is India who are under pressure as they are going into the game as favourites," said Sarfraz on the eve of the much anticipated encounter.
While Pakistan hold a 2-1 lead over their fierce rivals and neighbours in the Champions Trophy, it is India who have won 10 out of the 11 contests at the World Cup and World T20 tournaments between the two sides.
In recent times, however, the rivalry between the two cricketing giants has been one-sided with India enjoying the lion's share of positive results.
The Pakistan skipper also stated that they have told his players not to get affected by the hype and the buzz surrounding the India Pakistan game, but to focus on their strengths.
"You will see us doing new things and playing out of the box cricket against India in tomorrow's game," he said.
"I have told my players not to get affected by the hype and the buzz surrounding the India Pakistan game but to focus on their strengths," he added.
Meanwhile, coach Mickey Arthur admitted that it would be a big pressure game for sure but his team is prepared and the environment in the dressing room is unbelievably calm.
"We are ready for the big game. Our change room is completely calm. It's amazing. It's the outside noise that there is. Within the dressing room, it's unbelievably calm. We are unbelievably focused and are very very excited for the challenge that is going to be presented before us tomorrow," Arthur said.
"We know for us to progress in this tournament, we have got to hit the ground running. So, whether it was against South Africa or Sri Lanka, the intensity and the expectations certainly from myself as a coach and I am sure from the captain, would have been exactly the same. We cannot take our foot from the pedal from any game. We cannot think its India and we have to lift ourselves because that would be very unprofessional," he added.
The South African further called on his players to control the nervousness and focus on their strengths rather than getting carried away by the hype and the emotions surrounding the clash.
"They (players) can only control it (nervousness) themselves. And the only way your control that nervous tension is through your preparations," he said.
"It's like the exam. If you cram for an exam and you go and write it, you are always on edge. You are always nervous. You show a lot of tension because you know you haven't done the work."
"But if you have prepared properly, you will be nervous but it will be excited nervousness. That's where we find ourselves as a team at the moment. Extremely well prepared and ready to go," he added.
Squads:
India: Virat Kohli(c), Rohit Sharma, Shikhar Dhawan, Yuvraj Singh, Ajinkya Rahane, Dinesh Karthik, Kedar Jadhav, MS Dhoni, Hardik Pandya, Ravichandran Ashwin, Ravindra Jadeja, Bhuvneshwar Kumar, Jasprit Bumrah, Umesh Yadav, Mohammed Shami
Pakistan: Sarfraz Ahmed(c), Ahmed Shehzad, Azhar Ali, Babar Azam, Fahim Ashraf , Hasan Ali, Imad Wasim, Junaid Khan, Mohammad Amir, Mohammad Hafeez, Shadab Khan, Shoaib Malik, Wahab Riaz, Fakhar Zaman, Haris Sohail. (ANI) 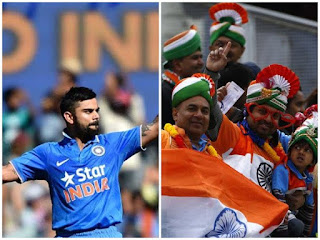