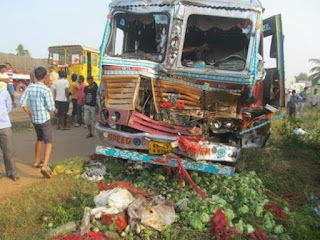 A speeding truck ploughed into a roadside garage on Behrampur-Lalbag state highway in Radharghat area under Behrampur Police Station in West Bengal's Murshidabad district in the wee hours of Tuesday, killing at least three people, reports said.
According to reports, the incident took place at around 2:30 am. and the victims were sleeping inside a garage at that time.
"As the incident happened in the wee hours, we have not found any eyewitness of the accident," a local police official told IBNS. "After a primary probe, we are suspecting that the over-speeding truck lost its control and crashed into the garage."
"After being informed, police and rescue teams rushed to the scene and rescued three persons from the mangled garage. We took them to a hospital where they were pronounced dead," the official added.
The deceased have been identified as the car servicing garage's owner- Nidhu Karmakar (26)- and his two teenage staffers, Bimal Mondal and Manik Das, according to police reports.
Police, however, seized the killer truck while its driver and helper are absconding.
By Deepayan Sinha, IBNS
Bengal