- June 01, 2017
State Govt to launch 10,000 e-rickshaws
The Bengal Government has decided to launch 10,000 e-rickshaws in the State before the panchayat elections in 2018. It would entail a cost of Rs 365 crore on the part of the State Government.
The primary aim of this scheme is giving a means of employment to the youth in rural areas. The scheme is part of the Swami Vivekananda Swanirbhar Prakalpa, one of the glittering successes of the Chief Minister Mamata Banerjee-led Trinamool Congress Government.
These e-rickshaws are battery-run and hence environment-friendly. Each charge lasts for a few days, depending on the usage.
Of the cost of Rs 1.25 lakh for each e-rickshaw, 30 per cent would be borne by the Government as a grant, 55 per would be given as loan by banks and 5 per cent would have to be given directly by the buyer.
The Department of Self-Help Group & Self Employment would be in charge of running this scheme.
The State Government is also thinking of permitting e-rickshaws to run in the suburbs of Kolkata. 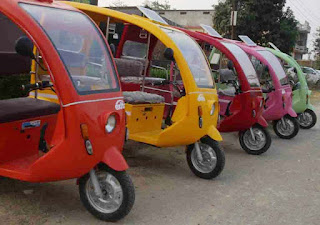