- June 07, 2017
West Bengal BJP president Dilip Ghosh on Wednesday accused the TMC government in the state of “step motherly” attitude towards GJM as it is has an alliance with BJP in the hills.
“A GJM delegation met me today and complained about the step motherly attitude of the state government. How Gorkhaland Territorial Administration (GTA) is not allowed to work properly and they don’t receive funds regularly. The GJM delegation told me how they are being hounded and victimized by the state government. The autonomy of GTA is only on paper, the reality is something else,” Ghosh told PTI.
The meeting between the GJM and BJP comes at a point when West Bengal Chief Minister Mamata Banerjee has accused GJM of pursuing divisive politics in the hills. Banerjee has also questioned the performance of the GJM-ruled GTA and said the money sent by the state government has been misused by the ruling regime.
The GTA is presently under the control of Gorkha Jana Mukti Morcha (GJM), which has been fighting for the demand of separate state of Gorkhaland.
Ghosh said GJM has requested him to apprise the central government and BJP leadership about the ground reality in the hills.
“We have an alliance with GJM in the hills and that is why they are being victimized. They have requested us to inform the central government and BJP leadership about the ground reality in the hills,” Ghosh said. Asked to comment on the demand of separate state of Gorkhaland by GJM, Ghosh said “How can I comment on it. It is for the central government to decide,”. 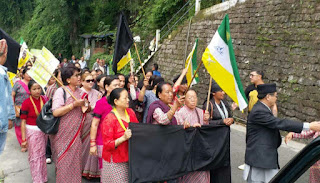