- June 06, 2017
Hours after Bengal Chief Minister Mamata Banerjee ordered a ‘Special Audit’ of Gorkhaland Territorial Administration (GTA) fund, its Chief Executive Bimal Gurung on Tuesday threatened to resign and warned to intensify movement against compulsory Bangla language in schools and for a separate Gorkhaland.
On Wednesday, Gurung will hold a meeting with the GJM leaders and GTA members at Bhanu Bhawan in Darjeeling to decide the future course of action.
While hitting out at Mamata Banerjee, Gurung said, “Before going for GTA’s special audit, she should look at her own party leaders who are under CBI scanner in Saradha and Narada case. She should have called for a probe before CBI came in to the picture.”
“Tomorrow, I will have a meeting with the GTA members to decide my next course of action,” he said while adding that if required he is ready to resign from the GTA.
“Under current political scenario it is difficult to believe in the present government in Bengal. We have lost all hope in the Bengal government and want an immediate solution to separate Gorkhaland,” he added.
The decision taken by the state government is likely to bring more trouble for Bimal Gurung – who is also the founder of Gorkha Janmukti Morcha (GJM).
In recent years Mamata is having a bitter political fight with GJM in the hills who are demanding for a separate statehood and allied with BJP to fulfil their demand.
While addressing a public meet in Mirik – first after winning the Mirik Municipality almost after three decades - Mamata warned, “No one will be spared who misused the funds (issued to GTA) in the name of development. I have information that funds for people’s welfare were misused and we are committed to take stern action against the guilty.”
“We will do special audit of the funds given to GTA. No one will be spared. They want hotels to close down, tourism to suffer. People will suffer losses, they will make commission,” she said while adding jo humse takrayega, chur chur ho jayega (Those who will confront with us… will reduce into pieces).
Hinting at Bimal Gurung, she said, “Some leaders here think of themselves as Gods. They are ‘shaitan’ not God. We want to work for the people of the Hills but the powers are with GTA.”
Sujit Nath | News18 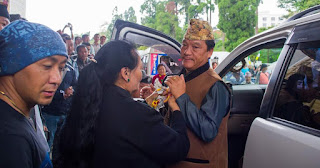