- June 12, 2017
The police on Monday arrested a fake doctor who had been practicing in his chamber at the bus stand area of Cooch Behar without a valid registration. The local residents said that the accused Subrata Sarkar had been practicing in the area as an orthopaedic surgeon for many years. A woman, a resident of Dhubri in Assam, was touring the district and went to his chamber on Sunday. After consulting Sarkar the woman found something suspicious in his treatment and lodged a complaint in the local police station. On the basis of the complaint, the police raided his chamber and asked the accused to produce his registration and other documents relating to his degree. After he failed to do so, the police arrested him. The woman told the police that the accused also asked her to undergo some clinical tests and some of his assistants urged her to go to a pathology centre situated in the nearby area. Police suspect that the accused used to get commissions from this pathological centre. Some of his assistants also used to get money from the accused. Police said that all the degrees that were mentioned on his writing pad were probably false as he failed to show a single document to support his claim. A detailed probe has been initiated in this regard. It may be mentioned that Howrah police on Sunday arrested another fake doctor from Domjur who had been practicing as an MBBS doctor for years. The police went to his chamber and asked for his registration. He was arrested as he failed to produce valid papers. Four such fake doctors have been arrested from districts. Meanwhile, the Kolkata Police have taken Naren Pandey in their custody for further interrogation into the fake doctor incidents which were unearthed by the Criminal Investigation Department. Pandey had been practicing at Belle Vue Clinic.
Millennium Post 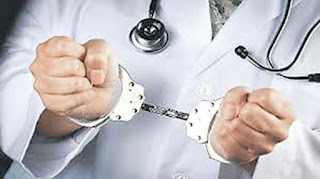