- June 03, 2017
Near-complete closer of almost all academic institutes in Darjeeling hills on Thursday and Friday has made it clear to TMC leaders that snatching political supremacy in the hills out of the hands of GJM is not going to be a cakewalk. The closer was following a call of Gorkha Janamukti Morcha(GJM) to protest WB state Government’s initiative to induce Bengali language as compulsory in all schools of the state including hills.
Though there was no sloganeering or picketing on road by GJM, hardly any academic institute was found open in Darjeeling. Other hill sub divisions, Kurseong, Kalimpong and Mirik also showed near similar picture.
“Any initiative to disrupt academic activities will be handled in strict manner,” said DM Darjeeling J. Dasgupta. Following that, official complain was lodged against number of academic institute officials as well as GJM leaders including its President Bimal Gurung.
“While the CM herself is making it a must to put Bangali as compulsory throughout the state, Darjeeling district administration is stating it in different way. We are confused,” said an administrator of a major institute in Darjeeling.
TMC leaders are also equally confused. “There is no plan of making Bengali mandatory in hills,” said hill TMC president R. Mukhiya at a public gathering. Clear enough, Mukhiya wants to maintain his own political existence in Darjeeling where the populace with over 50% share of Nepali speaking people has clearly become polarized against the state’s decision.
The thirty years long separate statehood demand for Darjeeling hills has drawn a clear linguistic demarcation between Nepali and Bengali speaking portion of the populace. While the Bengali section is against Gorkhaland, the larger Nepali language speaking section is die hard supporter of the demand. GJM remained undisputed torch bearer of the demand for last one decade.
Despite that, GJM had to lose few seats in recent municipal elections to TMC after enjoying unopposed power in hills following TMC’s aggressive political activities there. But, “This two days long stir has given fresh air to GJM making the hilly terrain tougher for TMC,” said political analysts.
By
Debasis Sarkar
Economic Times 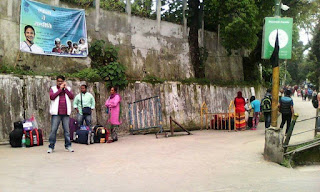