Election fervor surrounding the civic polls has finally gripped Darjeeling with political bigwigs descending on the campaign trail. Front-rung leaders of the Trinamool Congress, some of whom are ministers in the Bengal government, are already camping in the Hills. Darjeeling, Kurseong, Mirik and Kalimpong municipalities go to polls on May 14. Counting is slated for May 17. In the last Municipal election in the Hills in 2012, most of the seats were won uncontested by the party in power in the Hills — the Gorkha Janmukti Morcha (GJM.) This time, however, with the Hills having undergone steady political transformations, the elections are slated to witness close contests. The main forces in play are the GJM, TMC-Gorkha National Liberation Front alliance and the Jan Andolan Party. Interestingly there are a large number of independent candidates as well.  TMC initiated their door-to-door campaign in Darjeeling led by TMC's Tourism minister Goutam Deb in Darjeeling town. Deb, along with other TMC candidates, visited wards seeking votes, with slogans of "Parivartan" (change). "The Bengal CM has visited the Hills 70 times in six years. She has launched numerous development projects related to education, health, road connectivity, drinking water along with other civic amenities despite the fact that we are not in power in the civic bodies," stated Deb. He said that as many as 15 community-based development boards have been formed.  "They are also undertaking different small-scale development activities including housing, water schemes, roads. Kalimpong has been made into a district and Mirik a sub-division. We appeal to the people to vote for the TMC-GNLF coalition for development, better governance, transparency and for better civic amenities," stated Deb. The minister also claimed that the GJM-led GTA has not done anything constructive in the past five years. "The GTA and the municipalities under the GJM were corruption and nepotism-riddled. They failed miserably," alleged Deb. The minister will be camping in Darjeeling till the elections while TMC leader and North Bengal Development Department minister Rabindra Nath Ghosh is camping in Kurseong.  TMC national youth president and MP Abhishek Banerjee will be present in Kurseong on May 6 where a huge rally will be organised.  Urban Development minister Firhad Hakim along with PWD minister Aroop Biswas will also be present in the Hills to campaign. On May 5, a TMC rally is on the cards in Darjeeling at the Motor Stand. Reacting to GJM's campaign slogan "Gorkhaland versus West Bengal" Deb stated "People now know the truth. For how long will they fool them. People know how many times they have resigned from GTA and again joined."  In the evening GJM president Bimal Gurung went on a door-to-door campaign in Darjeeling. 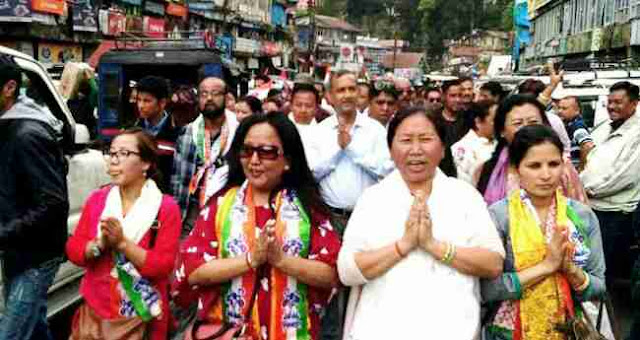