- May 20, 2017
The century-old steam locomotives of the Darjeeling Himalayan Railway (DHR) on Friday got a new lease of life with the Northeast Frontier Railway signing an MoU with Heavy Engineering Corporation Ltd (HECL) for supply of spare parts conforming to the World Heritage status that the toy trains there enjoy. “It is a Red Letter Day in conservation history of Railways as the signing of MoU will now ensure that the Heritage-era steam locomotives will never die out. HECL has committed to supply 41 critical spare components for the available steam locomotives, which in turn will ensure that the heritage trains will remain ever operational,” Rajen Gohain, minister of state for railways, in whose presence the MoU was signed at the NF Railway headquarters here, said.
Since most of the 13 small steam locomotives – known as ‘B’ class engines – are still in use despite being more than 100 years old, most of the original manufacturers have stopped manufacturing such locos and their spares. “While keeping them operational and keeping the original features of the locos intact pose a big challenge for Darjeeling Himalayan Railways, HECL, through the MoU, has agreed to manufacture and develop various items and spare parts that these locomotives require,” minister Gohain said.
According to the MoU, HECL has agreed to manufacture spare-parts of narrow gauge steam locomotives, and develop steam boilers for such locomotives, and supply them to NF Railways for the next five years.
This in turn would ensure optimum and efficient utilization of the locomotives for making the Darjeeling Himalayan Railway sustainable and commercially viable, the minister said.
Darjeeling Himalayan Railway was bestowed with the World Heritage Site status by UNESCO in 1999 for “bold and ingenious engineering solutions to the problem of establishing an effective rail link across a mountainous terrain of great beauty.” It had also observed that DHR had retained “most of its original features intact” in 100 years.
Earlier, in January this year, Indian Railways had signed a fund-in-trust agreement worth 5,33,332 US dollars to enable UNESCO develop a Comprehensive Conservation Management Plan (CCMP) and a framework for an effective management system for it.
Written by Samudra Gupta Kashyap 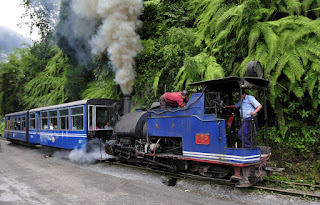