The state election commission has decided not to provide a None-of-the-Above (Nota) option to voters in Sunday's elections to seven civic bodies.

Voters in Bengal have been getting the Nota option in the Assembly and Lok Sabha elections, conducted by the Election Commission of India, since 2014. But the state election commission, which conducts civic and panchayat polls, is yet to implement the option in its electronic voting machines.

Asked about the omission, Darjeeling district magistrate Joyoshi Dasgupta - in charge of electioneering in the Darjeeling, Kalimpong, Kurseong and Mirik civic bodies - said the state poll panel had to issue a notification for the inclusion of the option. "The commission has not issued any notification and hence it will not be there," she said.

Similarly, the districts administration in North Dinajpur (for Raiganj), Murshidabad (for Domkal) and South 24-Parganas (for Pujali) have not received any word from the commission on the option.

State election commissioner A.K. Singh couldn't be reached on his cellphone. Secretary Osman Gani did not respond to calls.

Sources said the state poll panel would "eventually" include Nota, but it was yet to prepare itself for the transition.

Jana Andolan Party president Haraka Bahadur Chhetri said on Wednesday that he would resign as the vice-chairman of North Bengal Development Council on Thursday. 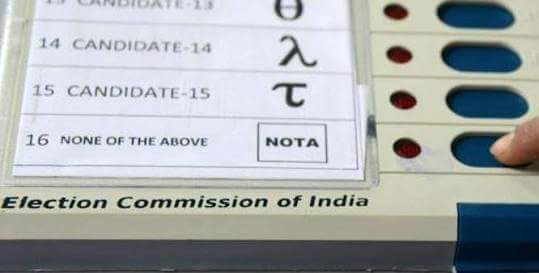