Bengal to have State Symbol for the First time

- May 31, 2017
Chief Minister Mamata Banerjee unveiled the state symbol that will be sent to the Centre for its approval. This is for the first time when such a step has been taken by the state government to have a symbol for the state.
The Bengal CM said: “There are many states that have their own logos. We didn’t have anything as such. Thus, the decision was taken to have a logo.” Citing examples of logos of Uttar Pradesh and Bihar, the Chief Minister said: “Logos of many states do not have the national emblem. But the symbol of our state has the national emblem.”  The new symbol will be sent to Delhi to get the final approval. The symbol has been designed by the Bengal Chief Minister.
The Bengal Chief Minister had also taken step to rename the state as “Bangla” in Bengali and “Bengal” in English. The Bengal Chief Minister, in spite of her ever busy schedule spends her leisure time in painting landscapes and has sketched the logos of various projects taken up by the state government.
The logo of the most popular project of the state government Sabuj Sathi, where 30 lakh bicycle have been distributed among the students of state-run, sponsored and aided schools and another 35 lakhs will be distributed shortly, was designed by her. The logo has been fitted on the bicycles in such a way that the users cannot remove it without damaging the bicycle.
The logo of Gatidhara, another very successful project of the state government, was also been sketched by her. In the maiden Kolkata-Andal-Delhi flight, she had sketched the logo. The logo is printed on all the vehicles given to the beneficiaries under the project.
She has named several projects and along with several state government establishments including the state secretariat — Nabanna — and the newly-constructed open air ampitheatre which she named Uttirnya. 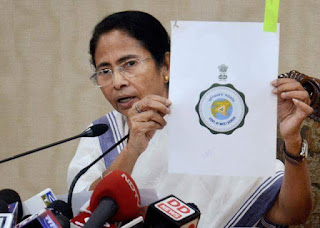